Lake Sunapee Region VNA & Hospice (LSRVNA) has been selected as a beneficiary of the Hannaford Helps Reusable Bag Program for the month of October. Launched in 2015, the program is designed to support local non-profits through the sale of the reusable bags. For every bag purchased at the New London Hannaford during October, LSRVNA will receive a $1 donation.

“We are pleased to have been chosen for this special support by our local Hannaford supermarket,” says Cathy Raymond, development officer. “Look for the Hannaford Helps reusable bag rack next time you’re at the New London Hannaford!”

Be a Sponsor of the Kids’ Christmas Project

Once again, Lake Sunapee Region VNA & Hospice (LSRVNA) is coordinating the Kearsarge Community Kids’ Christmas Project, and there are two ways you can help bring joy during the holidays by supporting local families in need:

If you are interested in participating in either way, please contact LSRVNA no later than October 30th.

Clinicians and Their Laptops…Perfect Together

The Lake Sunapee Region VNA & Hospice annual summer party held on August 22nd at the New London Historical Society was a grand success because of the generosity of so many guests, donors and sponsors. A relaxing evening of perfect matches featured food and drink, family and friends, and a special video presentation starring LSRVNA staff and their laptops! The three-minute video (read on to find the link) was a light-hearted, fun way to present the need for laptop technology, an essential tool for caregivers and clinicians.

To view the video, go to https://youtu.be/8HnmZmdw9ms.

Lake Sunapee VNA will offer a new Diabetic Support Group in two locations beginning on September 4. It will be held on the first Tuesday of every month in Valley Regional Hospital’s Library Conference Room from 10:00-11:00am and in Newport Health Center’s Community Room from 12:00-1:00pm.

“I will be there to address questions about things like diet, medications and foot care, but I hope participants will learn from each others’ experiences as well,” says Smerald.

Family members and caregivers of those with diabetes are also welcome to attend. RSVPs are appreciated by calling Lake Sunapee VNA at 603-526-4077.

A merger of the former Home Care Association of NH and the NH Hospice & Palliative Care Organization, the Alliance is a non-profit membership organization that enhances the ability of member agencies to deliver quality services to NH residents. The Alliance carries out this mission through education, networking, leadership and public policy advocacy.

Lake Sunapee Region VNA & Hospice is pleased to welcome Diane Brace, MSN, RN, as its new Hospice & Palliative Care Director. A native of New Hampshire, Diane has more than 25 years of nursing experience with hospitals in the southern part of the state. She has worked in varied specialties from acute care (including med surg, cardiac telemetry, intensive care and the post anesthesia care unit) to an outpatient interventional pain center and other outpatient procedural clinics, such as endoscopy and urology. 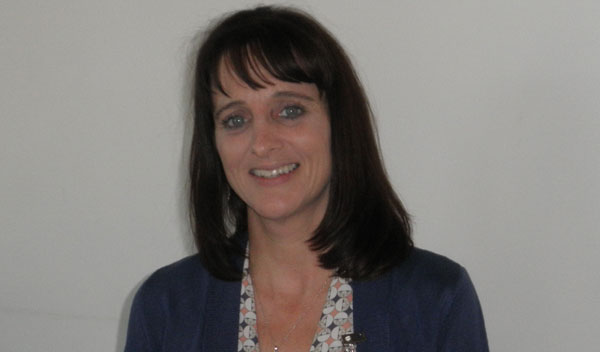 Diane obtained her Associates Degree in Nursing from Manchester Community College, attended Rivier University and then received her Masters of Science in Nursing from Walden University in 2011. Her career then transitioned to nursing management, where she worked as nursing director of assisted living and long term care facilities and then as director of clinical services for a hospice company. She says, "I am passionate about patient care in general, but especially end-of-life care, where we have the unique opportunity to treat, not only our patients, but their families as well. I look forward to working with such a great team of competent and caring staff at Lake Sunapee Region VNA & Hospice."

Three area Veterans of the United States Army were honored recently by Lake Sunapee Region VNA & Hospice (LSRVNA) as part of the national “We Honor Veterans” program. LSRVNA has been a We Honor Veterans Partner since 2011, which involves meeting specific requirements to enhance care for patients who served in the military. For those Veterans who are interested, that includes a special in-home recognition ceremony conducted by LSRVNA staff.

Ralph Rouillard of Claremont was honored posthumously on May 22 for his service as a PFC in the Army, peacetime, from November 1956 – November 1958. Though he passed away shortly before the scheduled ceremony, he was pleased to be acknowledged for his service and had shared the following details about his military experience with LSRVNA. After basic training at Fort Dix in NJ, he was transferred to Fort Monmouth in NJ for three months. He was then sent to a Nike missile base in Shelton, CT for a month and then to Fort Belvoir in VA for two months to be trained to prepare missiles and elevators in missile silos, specializing in hydraulics and electrical. He finished up at the Fairfield, CT base which was the headquarters for the east coast anti-aircraft missiles.

Harold Whiting Sr., a World War II Veteran and resident of Lempster, was honored on May 24 for his service as a PFC in the 7th U.S. Army, 157th Engineers Combat Battalion, Company B from December 2, 1943 – June 6, 1946. He enlisted at the age of 18 and recounts from his time in the European Theater, “We arrived at the Rhine River at about 5am. Our job was to build a landing for ducks (water-propelled cargo trucks). There was a tank already burning from the early morning that tried to cross but didn't make it to the water.” After discharge, Mr. Whiting returned to Lempster where he lives with his wife of 67 years, Beverly. On Memorial Day this year, a plaque was dedicated in Lempster honoring residents of the town who served in World War II. Harold Whiting’s name has now been added to this military “Honor Roll,” a well-deserved recognition after so many years.

Shirley Dodge of Claremont was honored on May 29 for her service in the Women’s Army Corps from 1962 – 1964. She entered the Army at the age of 18 and was stationed at Fort Benning GA at the airport with majors, captains and colonels, where she was trained to do clerical work. She loved being in the military and says, “The army made me grow up, learn discipline.”

The We Honor Veterans program was developed by the National Hospice and Palliative Care Organization and the Department of Veterans Affairs. For more information, contact LSRVNA at 603-526-4077.

Lake Sunapee Region VNA & Hospice (LSRVNA) held its 19th annual Women Who Make A Difference Luncheon on May 16 at Colby-Sawyer College in New London. Net funds in excess of $13,000 were raised for the LSRVNA Pediatric Program.

Among the highlights of the luncheon was the guest speaker, Kasey Mathews, and her inspiring message about shifting your perspective to see the opportunities that often come with challenges we face. Of course, the other highlight was the much-anticipated recognition of area women who do extraordinary service to make a difference within the 29-town region served by LSRVNA. This year’s "Woman Who Makes A Difference Award" was presented to Deborah Mozden, a resident of Unity and executive director at Turning Points Network in Claremont. In the words of those who nominated her, "Deb has restored faith and hope in thousands of area women by being their advocate; she has helped the most vulnerable members of society in her decades of work and volunteerism." Lexie Grenier, a senior at Stevens High School in Claremont, received this year’s "High School Student Who Makes A Difference Award." In the words of leadership from Stevens High School, "Lexie is the epitome of what I consider to be ‘extraordinary’ and one of the most talented, driven, dedicated and empathetic young women I have ever met." 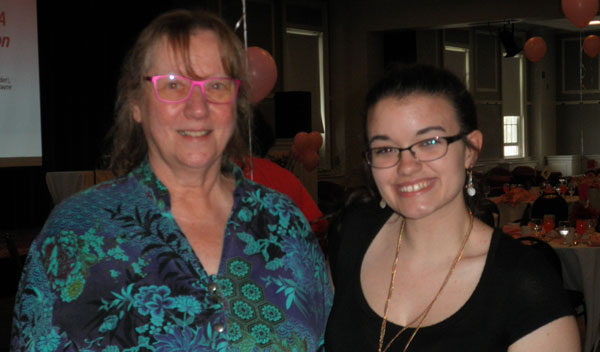 "We are truly grateful to the 220 people who attended the sold-out luncheon, and for so many in-kind donors and generous sponsors," says Cathy Raymond, development officer at LSRVNA. Special thanks go out to the 2018 STAR sponsors Ellie Snyder and Ledyard National Bank, and the 2018 ANGEL sponsor Mascoma Savings Bank.

For more information about pediatric care or any of the services offered by Lake Sunapee Region VNA & Hospice, call 603-526-4077 or visit www.lakesunapeevna.org.

SAVE YOUR SEAT for the 19th annual Women Who Make A Difference Luncheon on May 16, 2018 at 11:30 a.m. at Colby-Sawyer College in New London. $40 per person. Call or email today to reserve your seat! Additional details.

LEARN MORE ABOUT OUR FEATURED SPEAKER, Kasey Mathews, author of Preemie: Lessons in Love, Life and Motherhood and A Mom’s Guide to Creating a Magical Life, who will present “Shift Your Perspective…See the Magic.” 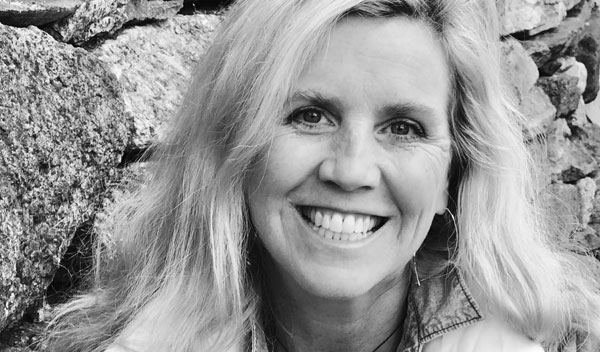 NOMINATE an area woman you know for her extraordinary volunteer community service. Nomination forms due no later than April 20, 2018.

Lake Sunapee Region VNA & Hospice (LSRVNA) presented its annual volunteer and staff excellence awards at its Annual Meeting on March 6. New London resident Pat Dazet, who has been an administrative volunteer at LSRVNA for more than 20 years, was honored with the 2018 "Joanne Hughes Volunteer Excellence Award." During the presentation, it was noted that, "Pat's attention to detail and dependability are of significant help to office staff, who are responsible for the agency's business operations as well as supporting direct caregivers in the field. She never seeks attention or praise, but instead shows through her actions that she believes in the mission of LSRVNA." 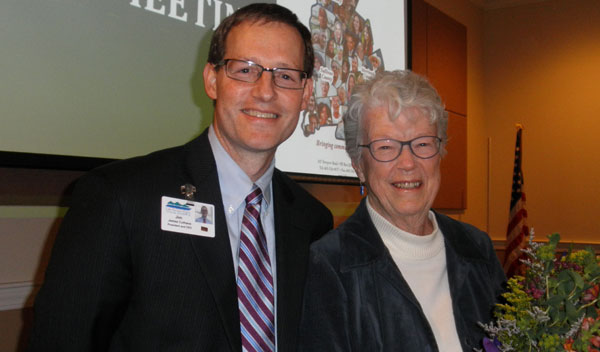 The 2018 "Imagine the Possibilities Staff Award" was presented to Sue Phillips-Young, RN-BC, CHPN, Hospice Clinical Performance Improvement Coordinator. Sue was described as having "the heart of a lioness. She is a brave advocate for all patients and works tirelessly to meet their needs. Her compassion shines through everything she does, and she is a model of what hospice care should look like." 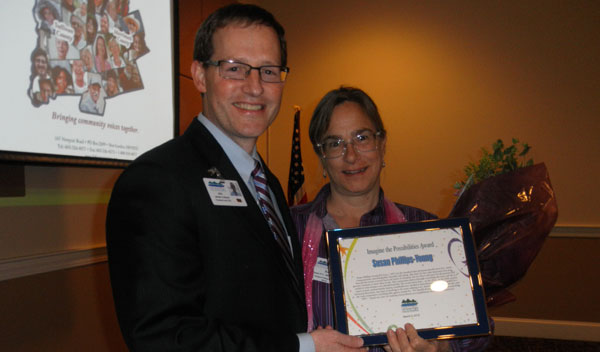 The Annual Meeting also included an overview of the results of the LSRVNA 2017 Community Health Needs Assessment. "It is our hope that individuals and organizations throughout the area will find the needs assessment report to be an informative and useful tool for planning and collaborative purposes," says Jim Culhane, President and CEO. "Though we as an organization can’t address every issue, we can work with community partners on those needs where we can have the greatest impact." The final report is available online at www.lakesunapeevna.org or in hard copy by request.

"Thank you for the competent and caring services provided by your staff during my husband's illness. This was the most difficult period in our lives and your good people eased the pain and transition."