On January 11, 2018 Melvin O. Clark was honored by Lake Sunapee Region VNA & Hospice (LSRVNA) at a “We Honor Veterans” ceremony in his Cornish home. Members of the LSRVNA caregiving staff acknowledged Mr. Clark for his service in the Army National Guard, where he voluntarily enlisted in 1953. With his son, Alan J. Clark, and grandson, Cullen A. Clark by his side Mr. Clark was presented with a plaque and pin honoring his service, as well as a commemorative memory book to help document stories, facts and special life moments. At the time of his final Honorable Discharge (“awarded as a testimony of honest and faithful service”) in 1961, Mr. Clark was a Corporal Grade E4 in the 4th Howitzer Battalion of the 197th Artillery based in New Hampshire. In addition to being a skilled marksman, Mr. Clark drove a Howitzer tank. Son, Alan, recalls how much his father loved driving the Howitzer and was reportedly seen chasing an occasional wayward deer or driving through a river just to see if he could get to the other side. Rumor has it that he was also usually the first in line for dinner!

As a civilian Mr. Clark was an expert and highly regarded stone mason, even building a fireplace for Guy Lombardo. Says son Alan, “Lucille Ball loved that fireplace so much that she had Melvin build one for her home in the White Mountains.” His expertise can be seen in the unique almost three-story hanging chimney at the Hopkins Center. Schools, state parks, stone churches all give testament to his mastery. He is the only person who knows where time capsules are in stone church foundations. “And when he wasn’t working, he always loved to dance!” shares Alan.

In 2011, LSRVNA was the first home care agency in New Hampshire to become a national “We Honor Veterans” Partner. Partners must meet specific requirements to enhance care for patients who served in the military during their lives. For more information please call 603-526-4077. 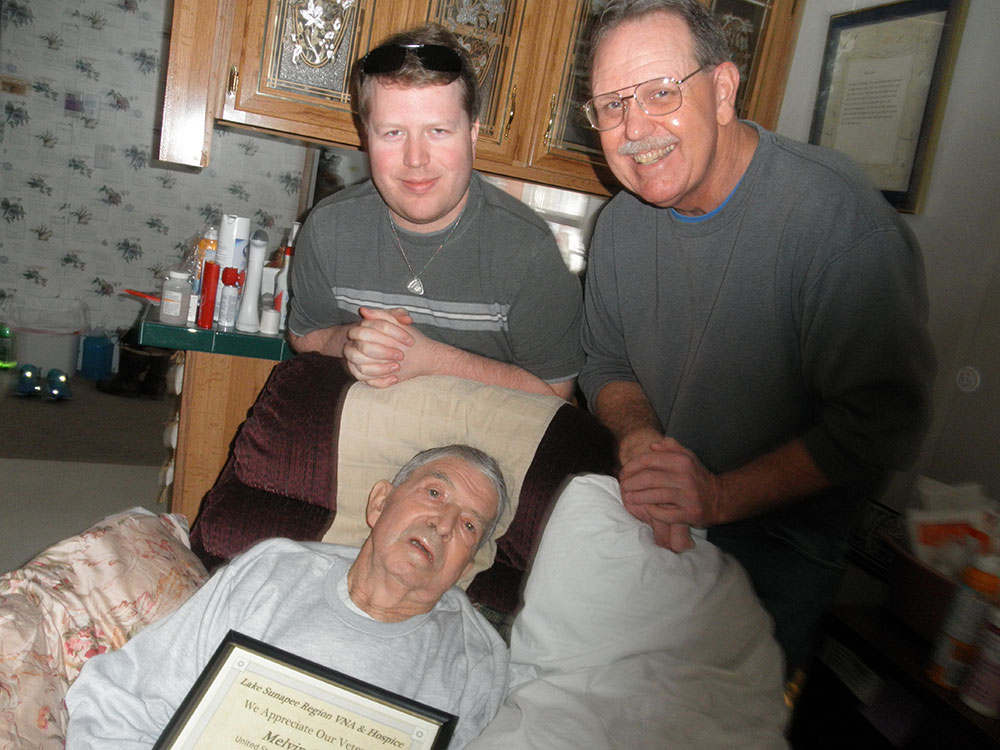 PHOTO CAPTION: (Standing) Cullen Clark (left) and Alan Clark share in the moment with Melvin Clark after the “We Honor Veterans” presentation.

"I cannot tell you how significant your presence was to the quality of my mother's life. It made it possible for her to remain in her own home, the biggest gift she could have received."